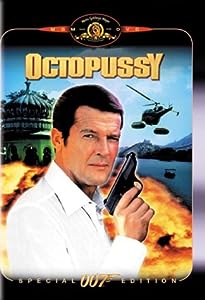 On Saturday afternoon there was a great thing on the TV-James Bond. I have liked James Bond for as long as I can remember, he always looked like a good person to be, escaping from certain death, having great gadgets, saving the world from some terrible plot by an over the top villain and always having some witty one liners. The slightly odd thing is that now James Bond reminds me of India. This isn’t just because it was Octopussy, where he was in India, but because of a rather odd circumstance.

Back in 2008 whilst in Chennai the team had a chance to do a bit of shopping, a small bit of time off during the hectic schedule.It was not quite the romantic scene of us bartering on dusty streets to get a bargain on some delightful handicrafts. Instead we visited Spencer Plaza, a rather larger shopping Mall, with a strange mix of large western style shops, and small shops where there was bartering afoot.I was in a very nice bookshop. The plan was (well for Cathy anyway) to buy some Indian cookery books to take home. What Ifound was James Bond.  Not just on James Bond, ALL James Bond. At the handsome price of 100 Rupees (£1.25) each. This was a source of great excitement, and a plan was formed. I was reluctant, even at this low price, to buy all the books, money was tight. So Isaac Jones, James Owers and myself formed a collective, each buying some of the books. Our plan was simple, we could now each read the books, then pass the books on to the others. We would all have access to all Bond books, Hurrah! We went further, now we can become slightly (very) nerdy and read a book, then get together and watch the film. Now we could compare the 2. It was a fun time, and helps me to remember that for all the hard work that we do on Chennai Challenge, we also get to have great fun, working as a team and forming bonds (pun intended) between us.

Octopussy itself also reminded me of another side of the Chennai Challenge experience – food. At one point in the film James is presented with a delicacy of a dish, stuffed lambs head, eyes and everything. To be honest the idea of being given that scares me, I would freak out if served a head. A lot of team members struggle with the food, and not always in the way you would expect. Of course there is a lot of curry, and for some it is a little spicy. Breakfast is often more of a shock, with the South Indian taste for sour flavours such as dosa or idli being very different from our rather sweeter taste for sugary cereal. However, one of the biggest challenges people have is unexpected by most. Meat on the bone. In the UK the majority of people only have curry with nice pieces of chicken breast in. Maybe some lamb or beef that has been cut up. If we eat from the bone we are prepared for it, and it is nice and ordered. The Indian way is more to use the whole animal, and so when we have a chicken dish, it will have been left on the bone, but cut up more crudely than we might expect.  We don’t always get big bits of meat, but may have a big bit of bone, gristle or fat in there.  It’s a small step away from our little pampered world, and challenges a lot of people. You could also think of how this shows what waste goes on in the UK, if all we seem to eat is the ‘best bits’ of meat, a challenge to us back home as well.

So James Bond, a reminder of how Chennai Challenge is a great experience and lots of fun, but it will also push you outside of your comfort zone.